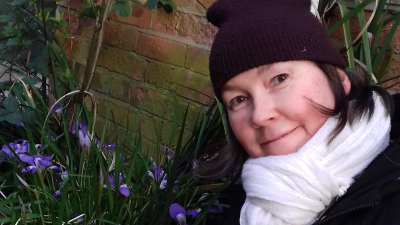 What I found really supported and helped me was the first ‘Clap for Carers’. I had heard it was going to happen, but had forgotten about it until then, when it started up for the first time. When I heard all the banging and whooping and clapping happening, I suddenly remembered - I opened the window and listened to all the people around us and realised, “This is for us, this is for me - this is people acknowledging my role, I feel connected. I haven’t felt this before, people really do appreciate what I’m doing!” and I felt quite emotional.

People do help usually, and everyone does say that what I’m doing is a great thing, but it’s all just occasionally. Most of the time you are just there on your own, doing it. Nobody is there for you all the time, and in fact there isn’t really anyone I know I can count on at a moment’s notice if something does happen. I only have one brother, and he lives in Sweden with his young family. He can help a bit from afar, but he’s busy with his wife and two young children. My partner is very supportive, but he’s usually either working or resting, and he also has his own problems to deal with.

When I became ill in March with Covid-19, the worst thing was being afraid that my mum would get it. I was only mildly ill to start with, but then after about 11 days my breathing was a little bit more difficult, and I could feel something in my lungs. Then I had a lot of fatigue and was just resting most of the day, and then I had palpitations if I exerted myself at all. It came and went, and after about six weeks I felt great and almost back to normal, but then it did come back every now and then and this went on for about eight months. I still have a cough and am still very wary of any exertion, in case it brings it back again.

All the time this was happening, I was able to still care for my mum, make her meals, and keep an eye on her blood sugars. I realised that what I do for her, although essential, is not a lot really, and leaves space for other things. I also realised that those small things I do, though they are small, and easy for me to do, those small things are actually what is keeping her alive! If I was not there, her life would be too difficult to carry on.

Also, since at the start I was trying to stay in my room as much as possible and just disinfecting everything I could think of, she somehow got used to me being around less and got into the habit of just going onto her computer and looking at her online newspaper, or Facebook, or her emails. (My mum got into computers in her fifties, carried on learning in her sixties, and has never lost that, so she’s lucky, now she’s in her late eighties, to still be connected in that way! She has recently started looking at Instagram too, as several of our friends put great pictures up there of their pets, places they have been, etc.) This has allowed me even more time to myself, so for example I’ve been able to write this quite easily. So the whole pandemic has been good for us in this way and we have both realised we are able to be more self-reliant.

Previously, my mum was quite anxious and needed a lot of reassuring, but she feels more confident now. (I think because with her condition of short term memory loss, things take a while to sink in for her, so she wasn’t really anxious about the pandemic at the start, and still isn’t that anxious now, especially as I don’t talk about it that much.)

I think it was good for me, and for her - even though I didn’t deliberately do it and it was just because I had to, because I was ill in bed - to take a step back and give her more independence and therefore confidence.

I know that a great many carers have found it very difficult, even unbearable, but apart from being unwell for a long time, there have actually been a lot of benefits to me from the pandemic and the lockdowns. So many things are online and on Zoom now that it means I can join in with things that I couldn’t have got to before, also we are not kept stressed by going to appointments, as there aren’t any, and I am now far from the only person with the experience of having to stay at home all the time because I’m caring for people, as that’s now the experience of everyone!