As Hayley’s grandparents grew increasingly frail, her and her mum gradually started doing more and more for them.  Hayley started by doing the occasional shop, but they grew to rely on her.  Her grandparents preferred to have help from family carers rather than paid care so Hayley and her mum, who both worked full time, shopped and did housework for them as the years went by.  Hayley explains: “The small tasks grow bigger until suddenly you realise you are a carer.  I didn’t clock it at first, as it’s such a gradual change, but then you can’t stop as they can’t get by without you.  We cared for eight or nine years, but due to my grandad’s increasing frailty we couldn’t do it anymore.” 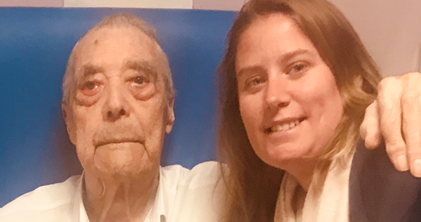 Unfortunately, after eight years, Hayley’s grandmother fell ill and went into hospital.  Hayley’s grandad couldn’t manage on his own so Hayley moved in with him for a few weeks.  Hayley and her mum were in crisis mode, visiting her grandmother, looking after her grandad while trying to work through it all.  Hayley works full time, on shifts and she had to ask for flexibility.  Combining working with caring responsibilities is tough.  Hayley says:  “It made me feel very stressed. Trying to do the right thing by my grandparents when I wasn’t not sure what that was added even more pressure. I felt guilty if I wasn't there, yet exhausted when I was.”

“My job was flexible due to shift work, but my former company took the time to understand my situation and provide flexibility.  My employer also offered me the support of our company health team and employee assistance programme if I needed it.  My employer made an effort to understand my role as an unpaid carer, and looked at ways they could better support people in this situation, as a result they are now looking into the 'employee for carers' scheme."

“With my current job I have not had an issue asking for flexibility, however in a previous role I felt very uncomfortable about asking for flexible working.  I believe anyone who is providing unpaid care should be entitled to company support the same as having dependent children. Parental responsibilities are well recognised, and employers are adaptable but flexibility for providing care for a younger person like me was harder to get."

Sadly, Hayley’s grandmother died and following this her grandad grew increasingly frail.  He had a fall and they struggled to get care for him so he stayed in hospital for three months.  Eventually he moved into assisted living accommodation.  Unfortunately, he died a short time later in the autumn of 2020.  Hayley feels the social care system is confusing, which added to the stress of caring.  Hayley continues:  “After you lose someone, you feel very alone with it all – and I wonder why is this all so hard?  The care system is very tricky to navigate and I also faced some difficulties at work, but these were resolved as ultimately my employer was understanding and flexible, but I was questioned why I was providing care for my grandparents, and I was asked for proof.  I felt I had to help support my mum, and my family.”

“We as family were expected to step up and care for them as a given, but we both worked full time.  I feel my grandparents slipped through the net as they were old and frail rather than having medical conditions – if they’d had specific health needs we might have had more help.”

“I think what would have helped is easier access to support as well as recognition of being a carer. Getting support as a carer is really confusing. I didn't receive any support from local carers centre mainly because I didn't know what was out there until it was too late. Mum and I lived around five miles from my grandparents but it put us under different councils. When we got in touch with my grandparents’ council we were told as we were primary carers it would fall to our council, yet when we contacted my local council they said the opposite.”