Hello, my name is Callum and I have been taking care of my sister, Sally, since I was five years old. 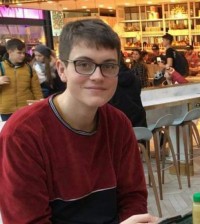 Sally is now 17 and when I am not at university studying to be a doctor, I spend at least 30 hours a week helping my mum, Sarah, to look after my sister whilst trying to help her increase her independence.

Sally’s inherited condition, spinal muscular atrophy (SMA) type 2, is a degenerative condition which is hopefully being maintained with novel medication.

She has been in a wheelchair since she was very young and she cannot move much by herself and struggles to sit upright, requiring physical support and help repositioning. She can move her arms but, as one might expect, is quite weak and requires help with a lot.

I take my caring role as well as my studies seriously but the crunch came during the pandemic when Sally had to be at home, shielding, for long periods of time.

The lockdown became very difficult when we were told to shield because Sally’s weakened respiratory system made her potentially very vulnerable.

On top of this, it was also year 12 for me meaning I had serious exams to contend with in the following year. The three of us (Mum, Sally and I) coped only because we were together supporting each other but I had several panic attacks and very serious anxiety.

Money from a Rank funded grant was awarded, and Callum spent it to partly fund a course of cognitive behavioural therapy following a diagnosis of anxiety and depression.

The panic attacks have not returned since starting university and my anxiety is much reduced, so I am extremely pleased to have had the opportunity to do this private course.”

“During Covid the stress and added responsibility was huge. There is only his mum, his sister and Callum at home. This young adult carer has taken on the role of father figure and takes his responsibility very seriously.

His sister’s condition has had a huge impact and has shaped what he will do with the rest of his life.”