Support is vital for us to function, and without unpaid carers, the country would crumble. 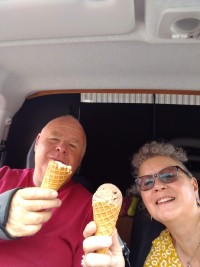 Hello, my name is Alison and I support my husband Bob who has an Acquired Brain Injury (ABI) since a craniotomy in 2016. Sometimes it's too much to cope with - for both of us - but despite the challenges, ours is a love story.

We've known each other since school, but didn't get together until a random meeting in 2011
when we were 50. Life really took off for us both very quickly and we had a wonderful time. We went out on Bob's motorbike and on camping trips. We used to meet up with friends, go to festivals and music gigs and visited lots of different places.

We were very happy.

We got married in June 2015, a lovely day filled with family and friends. Bob's health had already been deteriorating, by now he'd had to leave his job. On our first wedding anniversary we understood why. We got the diagnosis; there was a cyst in his brain that was growing very fast and he needed an urgent craniotomy. The surgery went ahead, then a rollercoaster year followed with Bob mostly in residential rehabilitation, before slowly integrating home to my care.

That's a lot of responsibility, but I got help from our local Carers Trust team, who helped me to access support. Gradually, over the next couple of years we reduced the support: in fact Bob progressed so well that we decided we should get on and live our best lives while we were still young (almost 60!).

Bob had always driven, for both work and pleasure, and now he had his driving licence back.
We could get a campervan again. We put our house up for sale and gave away most of our possessions. We bought a beautiful new van with some of the proceeds and designed it to suit our life.

Six months later we were waiting at Portsmouth for the ferry to Spain when the first covid
lockdown was announced... We managed to park up near family for support, but quickly realised that life wasn't going to return to 'normal' anytime soon.

We adapted again, and used the last of our house proceeds to buy a residential park home to
live nearby, rather than go back up north.

Although we love our new place near Stamford, Bob struggled with the changes. Not knowing our new local area, and not able to learn his way around, the new rules of life in a pandemic and not being able to go out to socialise all took a toll.

A year on, we both knew we needed help and started reaching out to the professionals who
should have helped us, but then it was approaching Christmas and nothing happened.

Bob took a massive overdose in January this year.

It was touch and go for him in critical care for six days. I'm not sure how he's still here, but I'm very grateful that he is. On the good days he is too. In the final note he'd written to me, he said he felt he was a burden and I would have a better life without him. This is obviously not the case, but I understand why he felt that way. Accessing support and dealing with bureaucracy is the burden, it makes caring so difficult at a time when you need the most help.

Bob's physical health has fortunately returned after the damage from the drugs he took, and
we're trying to get support in place again since the overdose. Carers First, Lincolnshire South, have been amazing. Marta Siroka Clarke really got things started for us, and then Becky Toynton did a Carers Assessment for me. I'm hoping to hear if a cleaner will be approved, which will help greatly as I have significant physical health problems. Caring takes up most of my day and I can't keep up with the housework, let alone take time for me. I've also just heard the good news that I will get a grant towards a laptop which will help with all
the administration tasks of being a carer; so far I've done everything (including this story) on my phone!

If only Adult Social Care could learn from the charity carers agencies. We still don't have
support in place from them, and I'm very tired of asking, only for nothing to happen. Throughout Bob's illness, before and after the brain surgery, I found the carers services
invaluable. What the professionals don't realise is that by the time we reach out for help, we've probably gone on for far too long. Whether through caring or illness, if you're asking for support, you most  probably need it.

Bob asked me to say a little bit about how much carers do: far more than anyone ever knows.
That's the thing, we're invisible. He reminded me of last year when I was laid up with two slipped discs (you see, he cares for me too). He'd come to me very upset after worrying he must be getting poorly again. Maybe his brain was growing another tumour? He didn't know where things were and couldn't find anything around the home. It was because I had been too ill to get up and put things back in the right place, to do all the micro managing which enables him to function, the things I don't like him to know about.

I work very hard to include Bob in as many decisions as possible, to treat him with dignity and to encourage him - in the words of a friend - "to be the best Bob he can be".

That's the nature of a brain injury in the part of the brain that's damaged for Bob. Every day
brings a challenge, and sometimes it's too much. But he also has days like today, when he sees how stressed I am, and we go for a little drive in the car and he treats me to an ice cream, or a simple walk with our dog Grace. Acts of kindness and love.

We are still very happy together.

It's really important to remember you're not just a carer. You have to remember to do the things you love, and remind yourselves who you are. You have to live YOUR life, you're the same people you were before the illness struck.

But for that you need support.

And to probably not worry about the washing up being done!