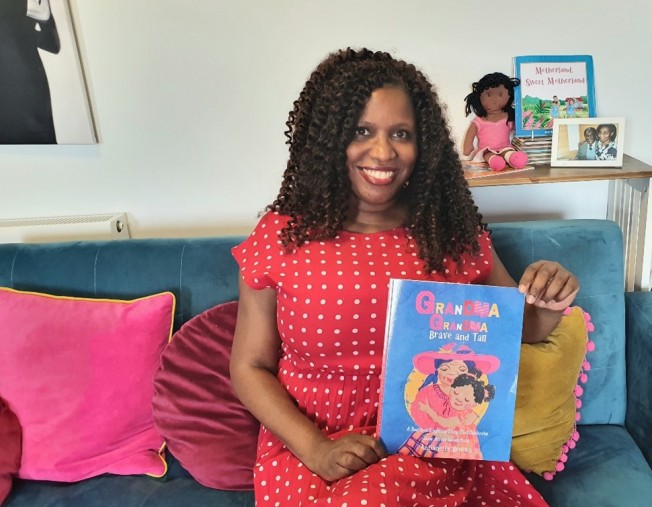 Despite struggling for many years with her own illness, Antoinette dropped everything to care for her mum during the last months of her mother’s life.

It was an overwhelming experience, and Antoinette would often forget to think about herself and her own personal development. But after registering with Carers Trust’s Working for Carers project, Antoinette got the support she needed to start thinking about how she could lead a more fulfilling life alongside her caring role. That support helped her tap back into a childhood passion for writing stories which had faded due to ongoing health problems over many years. With support and guidance, Antoinette has now published three books since her mother’s death. Becoming a writer has helped her find her purpose in life, as well as honouring her mother’s memory and Caribbean heritage.

The first few months of 2021 had been difficult for everyone. By March the UK was twelve months into the pandemic and was going through a particularly hard second lockdown.  Just as things couldn’t have felt more bleak, Antoinette was told that her 83 year old mum, Ilene, had been diagnosed with myeloma, an aggressive blood cancer.

It was the news that Antoinette from Camden in north London had been dreading. Over the previous year she had already been caring for her increasingly frail mum whose health had started to deteriorate. Ilene’s worsening health was exacerbated by a sudden sense of isolation that came from lockdown and being cut off from her community of friends at the Caribbean church that she had attended for years.

But when the news of Ilene’s diagnosis came, it was still a shock for Antoinette. “It’s as serious as it gets”, she was told. The cancer was too far advanced to be cured. And Antoinette was left to cope with the realisation that her mum might have just weeks to live.

“We were told the myeloma wasn’t curable and that mum probably had no more than three weeks to live. It was even harder because mum wasn’t talking much. She knew I wasn’t giving her the full story. The most difficult thing was having to take mum home and be strong for her, not letting my emotional pain show so I could carry on caring for her, even though my world was collapsing around me.”

Antoinette was determined to make the time she had left with her mum as special as possible, and to help her live for as long as possible.

“I took her out as much as possible to help stimulate her mind, and I made sure she had all her favourite magazines and home-cooked Caribbean meals. Most of all, I tried to have as many conversations with her as possible, to remind her of all the happy childhood memories she had of growing up in Jamaica. Even though we couldn’t get her to church, we’d sing her favourite hymns and bake cakes. And I tried to get as many of her church friends as possible to come round, including her best friend whom she hadn’t seen in many months.”

For a while it worked, and Ilene lived for months longer than the doctor’s original prognosis. But the level of care Antoinette was providing for her mum was beginning to take its toll, and Antoinette was left exhausted. “Some days I was so tired I couldn’t function.”

Every moment of every day was filled with Antoinette having to think about her mum’s health needs – dealing with palliative carers, visits to the Whittington Hospital, making sure Ilene wasn’t in pain. And then there was the agonising decision of whether Ilene should go into a hospice or whether Antoinette was strong enough to keep her mum at home, watching her deteriorate despite her own health and mobility problems.

“The only thing I could do was think about mum, and how I could make the last weeks of her life as comfortable as possible. It was hard to find any time for myself.”

Fortunately, Antoinette had registered herself for support with Camden Carers, a Carers Trust Network Partner. One of the support workers at Camden Carers suggested Antoinette join Working for Carers. The programme supports carers who have become isolated by their caring role to move back towards finding a job or following an interest as a way of reconnecting with themselves and fostering a sense of personal development.

Antoinette worked with Fenia, one of the support workers at Working for Carers. And it wasn’t long before they identified a project Antoinette could work on from home, helping her make use of her creative skills while still being available to care for her mum.

“Fenia was fantastic, really encouraging. It was so great to meet her every week and have something positive to focus on. It was a really precious time where I could focus on myself for a change and things that I could do.”

Antoinette knew deep down that she would love to write a book. But she had no practical experience in how to make her dream a reality. Fenia encouraged her to think about it like a business project and helped her come up with a business plan. And it wasn’t long before Antoinette had set up her own website, giving herself a platform she could use to share her stories and drawings with a distinctively Caribbean feel to them.

“What I love is not just that I’ve published these books”, says Antoinette. “I’ve performed them as well, reading them out at Camden Carers events. The audience loved it, and were soon getting involved and reading out the words as if it was their own story. I really feel like I’ve done something positive by sharing my culture and my mum’s culture. The whole experience has made me feel bright and positive, which is really incredible after the two years of lockdown and caring for my mum in the last months of her life.

“I was so low after mum passed away. But now I feel I have a purpose. I could never have done it without Fenia and Working for Carers. At the hardest time in my life, they gave me this network of support with other carers. Just being able to talk to them at our regular meetings was so uplifting. I’d advise any carer going through something like I was to grab the opportunity of taking part in Working for Carers. It may not seem obvious in the moment, but you’ll realise later just how important that support is, and it will be really obvious when you look back.

Most important of all, they believed in me when I’d stopped believing in myself.”

Find out more about Antoinette and her books.

Find out more about Camden Carers, a charity supporting unpaid family carers across the borough of Camden in London.

Find out about Working for Carers, a project run by Carers Trust to help unpaid carers in London move closer to work and personal development.

About Working for Carers

Working for Carers supports unpaid carers and former carers to move into or closer to employment. The project is jointly funded by the European Social Fund and The National Lottery Community Fund.