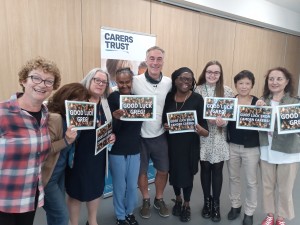 Carers Trust was thrilled when the BBC announced the much-loved actor, Greg Wise, was going to be one of the glittering contestants in this year’s Strictly.

Greg has been a passionate and committed champion of unpaid carers ever since becoming a carer for his dying sister five years ago. He moved into her house and devoted himself to her full-time care in the last months of her life as she died of cancer.

Speaking to the Daily Mail recently about the time he spent caring for his sister, Greg said: “It was an extraordinary trauma but also an incredible privilege. I wouldn’t be on Strictly otherwise.”

In an interview with The Guardian he has also highlighted just how important unpaid carers are to keeping the NHS from being overwhelmed: “There are 7m carers in the UK and generally with little help and almost no support from government. If they all went: ‘We can’t do this any more,’ and made the state responsible, the NHS would be bankrupt overnight.”

Watch our video of an emotional Greg as he thanks unpaid carers from Camden for their wonderful good luck send-off.

So we were determined to give Greg the warmest of send offs before he disappeared into the BBC studios for some intensive training and to learn the difference between a jive and the American Smooth.

And this is how we found ourselves around the corner from Greg’s house with a group of unpaid carers from the Camden Carers Centre, determined to wish him well with the most boisterous of good luck messages!

We hope that the carers’ good luck send off will keep Greg going during the long hours of practice, and hopefully as he jives, tangoes and waltzes his way to the final!

If you’d like to support Greg and unpaid carers, you can:

Find out more about Carers Trust, and about unpaid carers and the enormous contribution they make to looking after their family members.

Get support if you are an unpaid carer