I see no light at the end of the tunnel 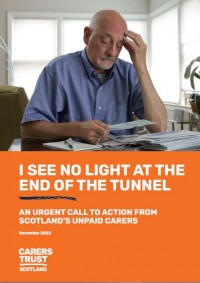 An urgent call to action from Scotland’s unpaid carers

In our new survey, we heard from 2,675 unpaid carers across the UK, including 531 living in Scotland, many of whom are supported by the UK-wide network of local carer organisations with which Carers Trust works.

This report from Carers Trust Scotland is a deep dive into the experiences and needs of unpaid carers in Scotland.

What we heard from unpaid carers in Scotland

“It’s crushing to not even be able to afford the most basics in life due to being an unpaid carer.”

"My mum and I are living in poverty in a cost-of-living crisis, this situation just isn’t right.”