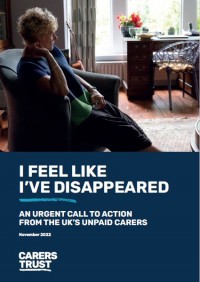 An urgent call to action from the UK’s unpaid carers.

Findings from a Carers Trust survey of 2,675 unpaid carers from across the UK, published today, reveal how many are experiencing unprecedented financial hardship as a result of their caring role.

The research highlights starkly how unpaid carers have been pushed even further into financial misery by the cost-of-living crisis. Amongst a series of alarming findings, the survey found:

“All general bills are a worry. It’s crushing to not even be able to afford the most basics in life due to being an unpaid carer.”

Based on the survey findings, Carers Trust is recommending that the UK Government:

Read the full report in English

Read the full report in Welsh

Find out more about our survey findings in Scotland

Read the press release on the survey findings

Responding to the findings of the survey, Carers Trust’s CEO Kirsty McHugh said:

“With little ability to work, unpaid carers simply cannot boost their earnings to meet the cost-of-living crisis. Yet they need to keep the heating on and equipment running to keep their sick and disabled relatives warm and safe. The recent Autumn Statement simply did not recognise the extra cost of being an unpaid carer. We therefore need to raise Carer’s Allowance urgently and to add it to the list of benefits qualifying for the additional £900 cost-of-living support payment.

“We also need Government to make good on its long-awaited promise to publish a proper strategy for unpaid carers. As a country we’re relying on unpaid carers to keep the health and care system afloat. The least we can do in return is ensure they get a fair deal in return”.

What we heard from unpaid carers

“I’m terrified that I won’t be able to pay the bills this winter.”

“It’s awful. I love my mum and will never stop caring for her, but that’s because if I leave, the council can’t provide the level of help she needs. It’s never a choice, no one choses this. It’s just something we have to do. I use the words ‘moral obligation’ a lot.”