Carers Trust Wales welcomes today’s launch in Ceredigion of their first Young Carers ID Card, part of a new national scheme to ensure that young carers get the recognition they deserve and the support they need.

The national ID card scheme, funded by Welsh Government, has been developed as a partnership between Carers Trust Wales and all local authorities across Wales, working to test and develop  a nation-wide approach to improving the experiences young carers have in health, social care and education settings.

The Young Carers ID Card will provide photo-identification for any young carer aged 18 or under who would like one. This will enable them to easily identify themselves to professionals without having to share personal details about their caring role. The ID card  in Ceredigion will  include local discounts and benefits in recognition of the significant contributions made by their local young carers.

Each card will carry the national young carers’ logo, designed by young carers Ffion Harding from Powys and Hannah Mushrow from Flintshire. Both won a national competition in 2019, judged by a panel including Julie Morgan MS, Minister for Health and Social Services, Sally Holland, Children’s Commissioner for Wales, and young carers.

Today Ceredigion become the first local authority to formally launch an ID card as part of their proactive approach to making sure young carers are prioritised and supported effectively.

The resources, including an animation and a series of guides for professionals and carers, will help to improve understanding and collaboration between young carers and professionals. All are now available at:

These stand alongside the education and schools focused resources to support young carers, also funded by Welsh Government, which were launched in September.

“The current pandemic has had - and continues to have - a major impact on us all, including Wales’ young carers.

“From balancing caring during a national lockdown whilst also doing school work at home and carrying out vital tasks such as shopping - I am very aware of how difficult their situation has been. That’s why I believe a young carers’ ID card is so important; we want young carers to be recognised, helped and supported to access services wherever and whenever they need them.

“I am pleased that with support from Carers Trust Wales and £200,000 of Welsh Government funding for local authorities to plan and test new ideas for an ID card, we can look to implement a national model across every area of Wales by the end of 2022 and follow Ceredigion Council’s lead with today’s launch.”

“Young carers have long called for an ID card to support them in their caring role and to ask for help when they need it.

“We are delighted that Ceredigion County Council has today launched the very first ID card under the new national model and look forward to seeing every area in Wales have an ID card by 2022.

“The whole of the community pharmacy network in Wales is delighted that the Young Carer ID scheme has begun to be rolled out across Wales, starting in Ceredigion. This is an innovative and common sense solution to a major issue for community pharmacists as well as young people and those they care for, and Community Pharmacy Wales is delighted to have helped co-produce a card which should have the confidence of all who need to use it.”

“The initiative has been developed in partnership with Young Carers, Carers Trust Wales, Welsh Government and Local Authorities. We are delighted to be able to use these supporting resources alongside the Young Carers ID Card to promote and enable Young Carers to receive the recognition, information and support they may need.”

“I warmly welcome the ID card, which young carers have told me will help them with their everyday lives, from school to shopping. Many young carers are proud of their caring role, but often need extra understanding and support from services and the wider community. This card can play a part in helping with this and I was delighted to be involved in choosing the bright and fun winning logo, designed by 2 young carers.” 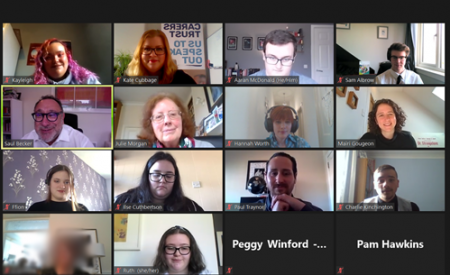 To mark Young Carers Action Day 2021 Carers Trust held a successful Bilateral Summit between the Scottish and Welsh Governments and young carers from both nations.

In Wales there are at least 7,500 young carers. A young carer is someone aged 25 and under who cares for a friend or family member who due to illness, disability, a mental health problem or an addiction cannot cope without their support. 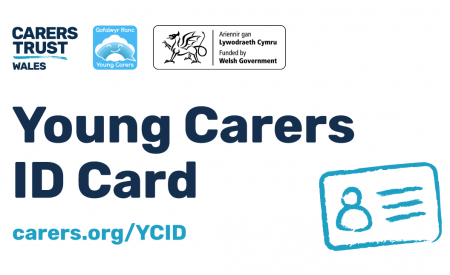