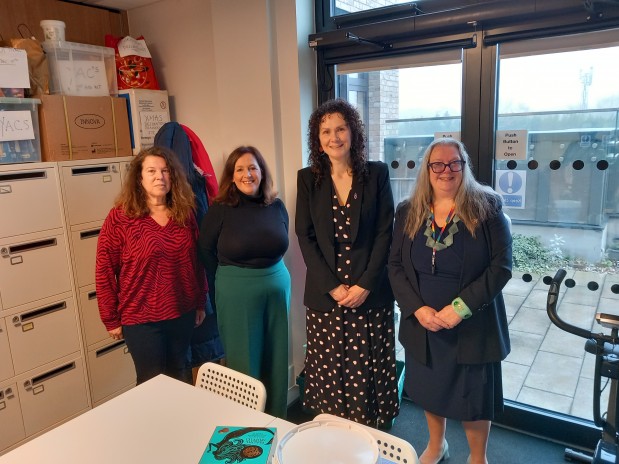 Wendy Chamberlain, whose Carer's Leave Bill is currently making its way through parliament and aims to provide employed carers with one week’s unpaid leave a year, spoke to staff and carers at the centre about the Working for Carers scheme’s success.

The visit, arranged by Carers Trust, saw the North East Fife MP meet one carer who has just secured a job after help from the scheme and another who is preparing to set up her own business. Working for Carers Project Manager Sigal Foster talked through the many successes and lessons learnt from the project so far.

Working for Carers is jointly funded by the European Social Fund and The National Lottery Community Fund. Led by Carers Trust and delivered by the charity’s Network Partners, it supports unpaid carers to move into, or closer to, employment.

Wendy Chamberlain said: “It is a pleasure to visit Camden Carers today and learn about the Working for Carers scheme. Far too many carers live in or near poverty and struggle to stay in work. Programmes like this are vital to help carers into work and to stay there.

“This is something I feel passionately about, and why I am bringing my Carer's Leave Bill to parliament to give unpaid carers their first dedicated employment rights to help them balance work and caring. Support from organisations like the Carers Trust is invaluable, both to during the passage of the bill, and to make sure that unpaid carers are supporting in knowing their rights in the future.”

The MP also spoke to Allegra Lynch, CEO of Camden Carers Centre, about the pressures facing unpaid carers in the area and the range of services offered to the 4,000 people it supports.

Sharon Hammond, Development, Learning and Activities Service Manager at Camden Carers Centre, said: “It’s increasingly important that carers are being brought into discussions in parliament and to make sure the Carer's Leave Bill goes through. Having Wendy take the time to speak directly to carers was really vital so she can hear about the impact on their lives alongside meeting the staff who deliver this project. It was inspiring to hear how passionate she is about the improvements she wants to put forward for carers.”

Joe Levenson, Executive Director of Policy and External Affairs at Carers Trust, added: "We’re delighted that Wendy Chamberlain MP was able to visit Camden Carers Centre today to see their great work and to find out more about the successful Working for Carers programme. In our recent Carers Trust survey, almost two in three adult carers told us they had been forced to give up work or reduce their hours due to their caring roles. That’s why Wendy Chamberlain’s Carer's Leave Bill is so welcome. There also needs to be a real focus on greater support for carers who want to work to be able to do so.”