Carers Trust is thrilled to announce that a staggering £2.5 million has been raised thanks to its six-year funding partnership with Rank.

The partnership started on 14 February 2014. And over the last six years, employees from across its Mecca and Grosvenor venues and Support Offices have shown a remarkable and ongoing dedication to raising money to help support unpaid carers all over the UK.

In total, 11,670 unpaid carers have been supported by Carers Trust and its Network Partners thanks to Rank employees’ commitment to the partnership. This includes:

Thanks to the continued support of Rank, Carers Trust has launched ten new peer support groups for adult carers. This programme aims to improve carers’ quality of life by reducing loneliness and social isolation through bringing people together in peer support groups.

To raise the £2.5 million, Rank employees have worked their way through the corporate fundraising checklist – from running the London marathon to cycling, climbing mountains, baking cakes and signing up to payroll giving.

And support has gone well beyond simply raising money. A whopping 9,000 volunteer hours have been clocked up by Rank employees, with many helping out in local carers centres. Just before Christmas last year, employees at Knotty Ash Mecca Bingo put on a wonderful Christmas party for 20 carers from Sefton, Merseyside. Carers were bussed over and treated to a day of pampering and massages, as well as a slap-up Christmas lunch!

“It’s staggering to reflect on how much this partnership has achieved thanks to the unwavering efforts of everyone at Rank. This has gone way beyond the usual one or two year fundraising arrangements. It has deepened into a long-term strategic partnership that allows us to plan and deliver services to unpaid carers in a much more sustainable way. On behalf of the 11,670 carers who have been supported over the past six years, I’d like to thank past and present employees at Rank for all their enthusiasm and dedication over the last six years.”

“It is an amazing achievement to have reached the £2.5 million milestone on our sixth year anniversary of supporting Carers Trust. Our teams have been involved with so many fundraising and volunteering activities over the years and, going forward, we have lots of initiatives in place to increase Rank’s support for Carers Trust, including many of us taking part in the Vitality Big Half run on Sunday 1 March. Thank you to all of my colleagues and to our customers for their ongoing support for the amazing work undertaken by the Carers Trust.” 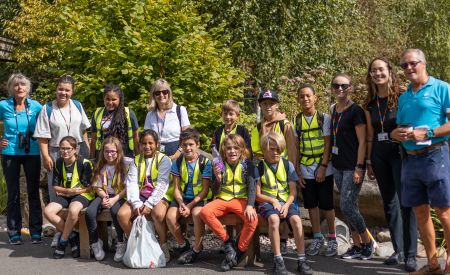