Becoming a carer for Mum was a turning point for me

Carina’s Mum was diagnosed with Schizophrenia aged 17. More recently she has been re-diagnosed as having schizoaffective disorder which also involves Mania and Depression and makes the illness harder to treat.

In this blog, Carina describes her upbringing with a Mum who had periods of severe illness. As Carina got older, she got closer to her Mum and finally came home to Marlborough in Wiltshire from York University, to care for her full-time.

Mum had me aged 32, after being told for years, she wasn’t well enough to have a child. There were fears that her medication would affect me in the womb. Although there still isn’t enough research into the effect of anti-psychotics and mood stabilisers on a foetus, mum chose to come off medication during her second and third trimester. Luckily I was born completely healthy but this was a sacrifice because while pregnant she had a psychotic episode. From early childhood to age 11 I didn’t see mum much because she was too vulnerable and unwell, and My Dad made the choice of me spending a lot of time at childminders to shield me and to protect my mum from the stress of bringing me up in case it triggered her illness. My parents were living at the poverty line but luckily had support from my very understanding grandparents. My Dad was very self-sacrificing in his caring role, giving it his all being a husband and nurse.  To this day he hasn’t had a trip anywhere or stayed overnight anywhere other than home and hasn’t been abroad since my Mum has been ill as he discovered change can be very bad for her illness. My Mum is from South America but hasn’t been back due to the fear that she could get ill there and there be very little support and great expense.

I remember feeling confusion about who my Mum was and what her role was in my life. I felt a lot closer to and connected with my Dad and I wish I could have been closer to both parents but don’t blame myself for the way I felt then.  At primary school when I was 8 I read my medical record and saw the words ‘mother has Chronic Schizophrenia’ and feeling more confusion. During that year my Dad broke his leg and spent a week in hospital. The day after the accident an episode of illness was triggered and my Mum was also in hospital and I ended up living at a childminders for a while. Although I wasn’t having a caring role at that age the confusion I felt about my life left me emotionally closed off as a defence mechanism, something I’ve struggled with a ever since.  Things could have been worse for me but I’ve also struggled with feeling of abandonment and anxiety. I’d hope there can be dialogues now for children who have an ill parent in 2022 and beyond, to be able to talk about how they feel and have the tools to process their emotions.

During my time at secondary school me and my Mum became more involved and I got more of a sense of who she was as an individual and what she was to me and we became friends. It was the most stable I have ever seen her. My Dad hoped this meant she would be well permanently. However, although well she was extremely nervous and needed a lot of support. For example, she could make short trips on the bus to our nearest town for errands thought it made her anxious but not much more. Because she appeared ‘normal’ and healthy people did not understand how hard things were for her. I remember a family friend saying it was “ridiculous” she felt nervous about going on the bus when it got dark on winter evenings. They did not understand how frightening it was not knowing when she would be ill again and that some of the awful hallucinations she had experienced when ill still haunted her when well.

In my second year of university my Mum had another psychotic episode, the only Hospital bed available was in London too far for my Dad to visit often and the other end of the country for me as I was studying in York. It was during exam season, and I did not know what to do, who to talk to or even how to articulate what I felt. I emailed my supervisor about my situation and got no response. I then asked my university department to change to another one who did respond. However, I did not feel there was enough support. There was a counselling service with a massive waiting list and no other help.

During my masters my Mum had another more psychotic episode,  which was more severe. I stopped doing my masters dissertation and came from York to my family home in Wiltshire to help out and be involved. That hospital stay lasted seven months. I feel since then I’ve been closer than ever with my Mum and it was during this time I became and later identified myself as a carer. I’ve since become very in tune with my Mum’s moods and emotions and what could trigger her. I’m her advocate, help her with reassurance and know how to act quickly in a crisis. Becoming a carer was a turning point for me because I’d felt so disconnected before from Mum and though it can be challenging as it requires a lot of energy and attention it brought me joy to be there for her and understand her in a way I hadn’t previously.

My Dad mentioned our local Carer’s Centre Carer Support Wiltshire and I was helped by a lovely support worker Andrea who made it possible for me to carry on my masters through writing a letter to my uni describing my caring role as evidence. Since then I become more and more close with my Mum. Through Andrea I joined activities in my area with other young adult carers, a steering group with other young adult carers at Carers Trust. I was also funded by a major donor there for counselling after seeing a video I was in. I’ve since gone on to work in the fundraising team at Carers Trust and become a trustee at Carer Support Wiltshire.  The reason I wanted to share my story is that every caring role is different and people become carers at different times. The support I received not only gave me the confidence to articulate myself and value the importance of sharing experiences but given me a passion to help others and value caring for my Mum, it’s one of the best things in my life. My Mum is currently in hospital but knowing I’ve got a support network like Andrea behind me gives me the strength to go on. 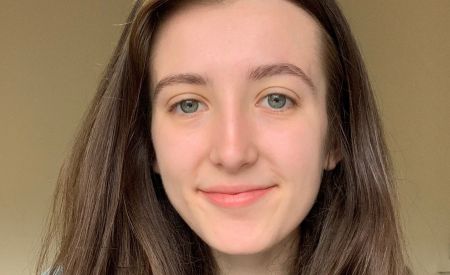 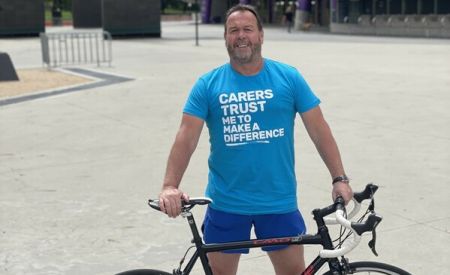 Andrew Crompton will be cycling across three continents, fourteen countries and ten time zones on a gruelling eight-month ride from Manchester to Melbourne, with the aim of raising £500,000 for Carers Trust and Bolton Lads and Girls Club.