Ollie Rogerson, and his mate Danny Rose from Manchester are undertaking a gruelling challenge in memory of Ollie’s dad.  The pair, who have been friends since they met at school aim to raise £10,000 for Carers Trust and The Brain Tumour Charity by cycling 1,800km from Lake Geneva to Manchester in just ten days.

Their journey is dubbed ‘Le Tour de Carl’ to remember Ollie’s much-loved father, Carl Rogerson, who was born and raised in Manchester but sadly died at the age of 58.  Ollie and Danny, both 29, are novice cyclists, having only taken it up as a hobby in the last year.  Ollie has been training hard in Geneva, where he lives, and Danny has been riding over the Pennines to get ready for the tough ride.

The duo will set off from Lake Geneva on Saturday 25 September and hope to arrive at the Etihad Stadium on 4 October.  Ollie says: “My father Carl was a kind and generous man who was an avid Man City fan, and loved his friends and family above all things.  He was committed to public service and served in the RAF for 15 years.”

However, in August of 2018, Carl was diagnosed with an inoperable brain tumour and given only 15 months to live. His condition meant that it was left to his son, Ollie, daughter-in-law and a close family friend to care for him.   Ollie says: “We all learnt just how big of an impact diagnosis such as this has, not just on diagnosed but on those closest to them too.  It can be incredibly stressful and exhausting as the person you are caring for becomes the centre of your life, which brings its own challenges which, I don’t think, are well understood outside of people who have really been through it. 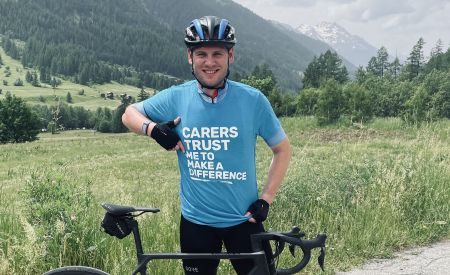 “For me, I love my Dad dearly and there was never any question that I would’ve been anywhere else during his illness, I cared for him and held his hand at the end.  I’m incredibly proud of the care we gave Dad - we managed to have lots and lots of fun along the way, despite his illness, COVID and everything else. However, none of that means that it wasn’t also an incredibly difficult time. Juggling work, my own life around Dad’s needs was at times incredibly stressful and I was so fortunate to have the support of my wife and family friends.”

Danny, who lives in Manchester said: “It’s a privilege to be a part of such a meaningful event in memory of Carl, with my best mate and for such amazing causes.  I knew that it would important for Ollie to have something positive to focus on, especially as life as an expat can get lonely at the best of times. He’s handled everything that’s come his way so well, and I don’t doubt for a second that Carl would be unbelievably proud.

“It will be an epic achievement for two novice cyclists, but to start outside Carl’s workplace of the UN office in Geneva and end in his birth city of Manchester, specifically at the Etihad Stadium of his beloved Man City, will be truly special.”

Carers Trust works to improve support, services and recognition for anyone living with the challenges of caring, unpaid, for a family member or friend who is ill, frail, disabled or has mental health or addiction problems.   Svetlana Kirov, Director of Fundraising for Carers Trust said , “We are really grateful to Ollie and Danny for taking on this huge challenge, and their supporters for making this possible. The money raised will help to support more unpaid family carers, who care for friends and family members with all types of health conditions.”

“We receive no government funding and rely 100% on voluntary donations, so it’s only through the efforts of people like Ollie and Danny that we can change these shocking statistics in the future and bring hope to the thousands of people who are diagnosed with a brain tumour every year.”

If you are looking after someone who could not get by without you please visit Carers.org for local support in Manchester, TheBrainTumourCharity.org to find out more about the UK’s largest brain tumour charity, and to donate to Ollie and Danny’s epic bike challenge visit here.

A new survey of carers from across the UK provides a stark assessment of how many of the UK’s seven million unpaid family carers have been plunged even further into financial misery by the cost-of-living crisis.