After caring for many years, Working for Carers helped Malcolm rediscover his enthusiasm, confidence and passion for the creative industry.

Malcolm, aged 57 lives in London with his partner and worked successfully for many years in the creative industries until his partner’s mother died suddenly. Over the next three years, Malcolm's partner was unable to come to terms with his mother’s death and started to struggle more and more, until he had a life changing major mental heath episode in 2012. 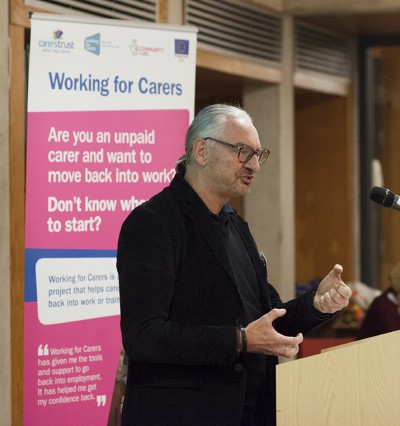 With no extended family living in the UK, Malcolm had no choice but to give up his job to care full time. Over the next few years, Malcolm and his partner were both able to go back to work part time, but periods of relative stability would always be followed by difficult personal times that had a serious and harmful effect on his partner’s mental health and were very traumatic and stressful for Malcolm.

For years Malcolm didn’t even see himself as an unpaid carer. But in 2013 he started engaging with carer support groups. He attended training on caring for people with mental health difficulties and learned the importance of making time for himself to do the things he loved. He began to swim, cycle and meditate again.

How did Working for Carers help?

In 2018, Malcolm joined the Working for Carers project at Harrow Carers. They helped him figure out what direction he wanted his career to take and to rediscover his enthusiasm, confidence and passion for the creative industry.

One-to-one sessions helped Malcolm revamp his CV to show off his vast experience and skills. Being away from the creative industry for so long meant he had lost all his confidence. Working for Carers helped restore that. It also paid for Malcolm to attend a two-day workshop led by a top creative agent.

What was the result?

Malcolm now understands the importance of looking after himself and how that can help him manage his caring situation. Through attending a business workshop organised by Working for Carers Malcolm decided to refocus his career path and reboot his own business. He has also become a mentor for others in the creative industries and is a founder of the new Film & TV Carers Club, set up by unpaid carers for carers working in film and TV.

Malcolm said: “I never expected to become a carer, but there are lots of other people out there like me. In my industry if you’re not available 24/7 your commitment is questioned, there’s a stigma to being a carer but we have all the attributes needed to succeed like empathy, time management, resourcefulness and problem-solving skills, which are needed by employers.

“Working for Carers reminded me how much I already knew. My confidence had gone but this gave me the boost I needed. I’m starting to dream again. I thought my drive had been extinguished, but the embers were still there. They just needed to be reignited and that’s what Working for Carers have helped me to do.”

Find out more about the free Working for Carers service in London and how it can support carers.